A permanent solution for baldness

The only natural and permanent solution for male alopecia

Now, at Clínica IMEBA® you can say goodbye to common or inherited alopecia, as well as alopecia caused by a scar. The results are very natural, it’s almost impossible to tell the difference between an original and a transplanted one. This intervention is more of a true work of art than a surgery.

This treatment, natural and safe, speeds up the scarring process, as well as the repair process of the tissues.

The main difference between both techniques lies within the extraction method of the folicular units from the donor area.

This is a painless and very effective hair implant technique that allows implanting one and a half thousand folicular units each intervention, which is roughly equal to five thousand hair.

In case of both of the possible techniques, the surgery is ambulatory, and is performed with local anaesthesia and sedation.

Is it a permanent technique?

Yes. The donor area is located in the back side of the head. In this area, the hair follicles have no receptors for testosterone, the male hormone that causes the thinning, weakening and falling off of the hair. Even when transplanted to the front area, these follicles remain unaffected by testosterone, which is the reason why their growth is permanent and equal to that of the non-transplanted areas.

Who is suitable for this treatment?

The hair transplantation is suitable for cases of common or androgenic alopecia, meaning a premature and progressive loss of hair in the frontal and parietal areas.

It also is indicated in cases of post-traumatic alopecia, consequences of scars in areas with hair growth. In both cases, the baldness is irreversible, and the only effective and permanent solution is a hair implant.

How long does the intervention take?

Between three and five hours. The greatest part of the time is used to microscopically separate the folicular units extracted from the nape of the neck. 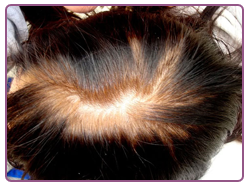 How many sessions are necessary?

Depending on the density of the donor area and the extension of the receiving area, more than one session might be necessary to get the desired result.

How long does is take for the result to be visible?

During the eighth month the hair already has a natural appearance, and the final result is reached one or one and a half years after the surgery.

Is the postoperative period painful?

It’s a painless process. During the first week, swelling and crusts might appear in the transplanted area. During the second and the fourth month the transplanted hair drops (telogen phase of the hair growth). This is totally normal, there is no need to be worried, after that, the growth and normalisation stage begins.

Also included is a free consultation with experts in the matter.